For every million people, on average, 250 people will be diagnosed with a brain tumour each year. The most common symptoms that patients experience with brain tumours are headaches, nausea, vomiting, seizures, weakness in an arm and/or leg and the loss of vision or confusion. However, brain tumours can present with many other less common symptoms.

Once your treating doctor is made aware of these symptoms, they will usually order a brain scan that will lead to the diagnosis of a brain tumour. While this news is very challenging to receive and a shock, the term brain tumour is a very broad term as there are over 120 different types of brain tumours. Each different type of tumour is unique in terms of how bad it is, how it is operated upon, what the potential complications are and whether other cancer treatments such as chemotherapy or radiotherapy will be required.

Although after a brain scan we can have a fairly reasonable idea as to what type of tumour you have, the only way to confirm a diagnosis is after an operation, where some of the tumour is sent off for testing by a pathologist – a doctor that specialises in looking at tumours under a microscope and performing tests that provide a diagnosis.

General treatment pathway following the diagnosis of a brain tumour

Plausible diagnosis based on scans

The following description is not meant to be definitive or exhaustive. It is rather meant to provide a brief introduction to some of the concepts used to understand brain tumour biology and then briefly introduce some of the more common types of brain tumours.

Like all types of tumours, brain tumours arise from a single cell with damaged DNA called a mutation that leads to uncontrollable cell replication. It leads to the cell cloning itself rapidly into billions of copies that eventually leads to a mass called the tumour. While there are rare genetic causes for brain tumours that run-in families and there are some risk factors such as exposure to ionising radiation the majority of people that are diagnosed with a brain tumour have no obvious cause – in essence, it is bad luck.

Brain tumours are given a grade after the pathologist has examined them – see above. This grade is called the World Health Organisation (WHO) grade. The grade ranges from 1 to 4, with 1 being a very good grade that means a tumour is potentially curable and 4 being a very bad grade that means the tumour tends to spread aggressively. The higher the grade, the more difficult it is to treat the tumour.

Oligodendrocyte – These cells wrap around the nerve cell axons and insulate them in a way that resembles plastic around a copper wire. By insulating the axons, electrical impulses are carried efficiently from one nerve cell to the next without leakage of current.

Arachnoid Cap Cells – These cells are generally located on the surface of the brain and involved in creating a thick membrane that surrounds the brain as well as helping drain the brains water system into the big veins of the brain.

Ependymal cells – These cells line the inner surface of fluid-filled cavities within the brain called ventricles. Ventricles are responsible for creating brain fluid called cerebrospinal fluid (CSF). Ependymal cells form a barrier between the brain and the CSF and also provide a filtering system.

Schwann Cell – These cells are only slightly different from the oligodendrocytes described above. The brain has nerves that are bundles of wires called axons whose role it is to transmit information between the brain to a target tissue such as to muscles to move the face or from the organ that perceives sounds to create hearing etc. The Schwann cells wrap around the axons within the nerves in order to provide insulation and prevent the leakage of current and bad transmission of information; much like the plastic around a copper wire.

Vascular Tissue – Like all organs, the brain requires the constant supply of blood – in fact, 20% of the blood circulating every minute goes to the brain. In order for blood to reach the brain in travels in blood vessels – these blood vessels are known as vascular tissue

Rathke's Pouch – This is an embryological remnant, which means that this tissue is not normally present in adults. The tissue appears for a very short while when we are developing as embryos. It is responsible for forming and attaching the pituitary gland to the brain

The brain is composed of many unique regions with different functions. Some regions can be tricky areas to operate within and require advanced anatomical knowledge. The regions are described separately here as they tend to have tumours that arise from many different types of cells. 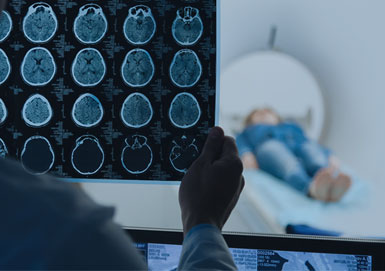